The sixth issue of InterNotional out with range of articles is published. 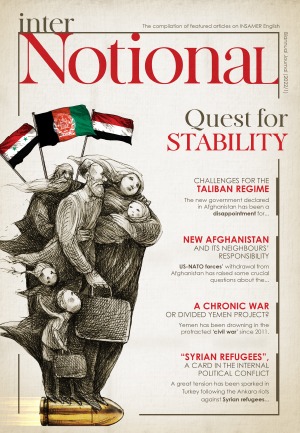 We are glad and happy to present our new issue of InterNotional. In this issue, we complied cover stories focusing on Afghanistan, Yemen, Syria and their seek of stability after a long-overdue conflict. After a 20 year-long war, the American military has been forced to leave Afghanistan leaving one of the poorest nations behind. However, the new face of the country, Taliban regime, has to deal with wide range of domestic and regional issues. Whether the regime might be a power creating stability for Afghans or not is a question seeking answer. After a 10 year-long civil war, Yemen is still suffering from internal conflicts. However, Yemen conflict is getting regional dimension after Houthi’s recent drone attacks to Emirati capital Abu Dhabi. Syria is still remaining in a dark tunnel. Civil war with its international dimension does not seem ending in a short term. However, it does not mean end of Syrians seek for peace and stability. Due to such a somberness, in this issue, we have chosen title “Quest for Stability”. But it is not all. There are also other articles focusing on Israel’s new era, BRICS’ role, nationalism in Europe and Turkey’s Africa interaction in the current century. We hope you enjoy the new issue of InterNotional.