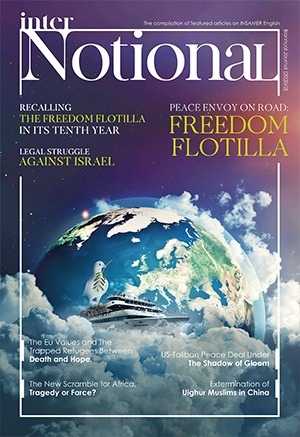 Soon after we published InterNotional’s first edition we received very positive and appreciative feedback. İNSAMER strives to direct public attention to the world with more focus on humanitarian and social perception. The developments in the MENA region for example, which we discussed in our previous edition, have once again demonstrated the necessity to voice out the regions’ humanitarian and social aspects.

Once we are introduced with the abovementioned aspects of the World, it would naturally become critical to fathom the shaping of Turkish foreign policy. Henceforth in the light of the rapid global transformation and the uncertainties brought about by the global economic system, we decided to raise the issues regarding Turkish foreign policy in our second edition.

It is crystal clear that we are now living in a transitional time. Actors, actions, powers and needs in the international arenas change in a rapid manner. The most visible arena at the moment is the arena of alliance. So it would be fascinating to see how Turkey catches up with the global change through its foreign policy in order to maintain good relations with different regions and actors.

This edition presents various geographical regions and countries in relation to Turkish foreign policy. Zones from both East and West will be examined, particularly in terms of the significant development regarding the Peace Spring Operation and the changing concept of Turkey’s security. We believe we could uncover and clarify issues that the West is misinterpreting, especially regarding Turkey’s fight against terrorism.

Aside from analytic articles on Turkish foreign policy, this edition of InterNotional will also discuss topics on Muslim minorities, climate change, education etc.

These papers have been selected with our modest work and offered to you for a pleasant reading.