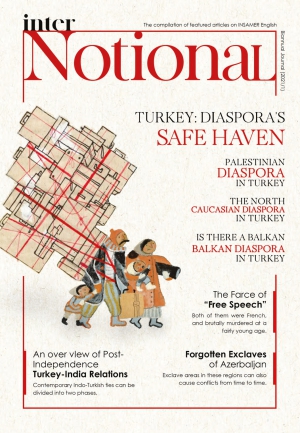 We are glad to present the fourth issue of InterNotional. This time we have chosen diaspora for this issue’s cover story. As a generally accepted phenomena that Turkey is in the middle of migration routes from East to West and South to North. Besides historical minority communities such as Bosniacs, Afro-Turks, a considerable number of new emerging communities are getting to be part of Turkish society nowadays.

Turkey is being a new safe haven for immigrants that taking risky journeys due to their dire situations in their homeland. The movement of immigration and refugees not only from the Balkans but also from Caucasia, Middle East, Asia, and Africa region have been making Turkey a new migration hub.

In order to shed new light on the topic, INSAMER researchers have examined various diaspora cases in this issue.

There are also articles touching other developments in international affairs; the process of “normalization” with Israel in the Middle East, the ongoing Syria crisis, armed conflict between Azerbaijan and Armenia, and reactions to Islamophobic expressions heard in Europe are amongst the other topics you will find out in this issue.