Projection of the Mavi Marmara in International Reports

In this article, three reports are considered reflecting their salient features: the report drafted by the United Nations (UN) Human Rights Council International Fact-Finding Mission after the Israeli attack on the humanitarian aid ships on May 31st, 2010; Turkey’s final report to the and the Turkel Commission Report that was formed by Israel. 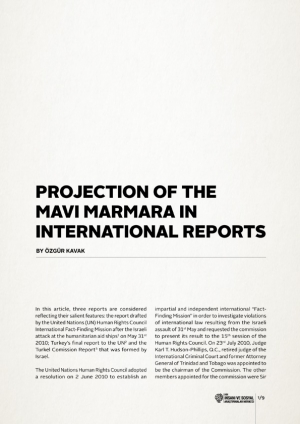 In this article, three reports are considered reflecting their salient features: the report drafted by the United Nations (UN) Human Rights Council International Fact-Finding Mission after the Israeli attack at the humanitarian aid shops on May 31st 2010; Turkey’s final report to the UN and the Turkel Commission Report that was formed by Israel.

The United Nations Human Rights Council adopted a resolution on 2 June 2010 to establish an impartial and independent international “Fact-Finding Mission” in order to investigate violations of international law resulting from the Israeli assault on 31st May and requested the commission to present its result to the 15thsession of the Human Rights Council. On 23rd July 2010, Judge Karl T. Hudson-Phillips, Q.C., a retired judge of the International Criminal Court and former Attorney General of Trinidad and Tobago was appointed to be the chairman of the Commission. The other members appointed to the commission were Sir Desmond de Silva, Q.C., former Chief Prosecutor of the United Nations-backed Special Court for Sierra Leone, and Ms. Mary Shanthi Dairiam of Malaysia, founding member of the Board of Directors of the International Women’s Rights Action Watch Asia Pacific and former member of the Committee on the Elimination of Discrimination against Women. The commission shared its findings with the public in a report presented on (September 27, 2010). Although the report does not have an internationally binding force, it has been drafted by the most competent authority of the UN body on human rights and is, therefore, respected by the international community. The report cannot be ignored during any of the follow-up processes in the context of the Mavi Marmara incident.

A Decade After The Syrian Conflict; What Has Changed In The Syrian Family Shape?

East Turkestan Report: Religious and Ethnic Pressure From Past to Present

When Syrian Reconciliation Means A Death Trap For Its People

On Critical Thinking and Freedom within Truth in Islam

UN Visit to So-Called Training Camps and Attitude towards China